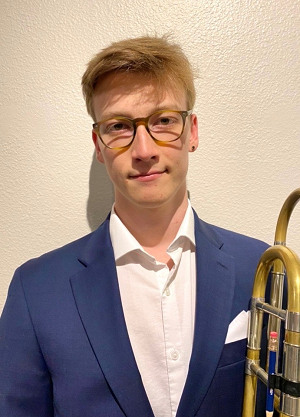 Trombone
Dallas, TX
Southern Methodist University
Originally from Houston, Derek studied with Mike Warny of the Houston Ballet and Grand Opera. Later in his career he began taking lessons with Brent Phillips, former trombonist with the Marine Band. He continued his studies with Mr. Philips at Baylor University for his undergraduate degree in performance. While at Baylor, Derek made finals for, and won multiple competitions and festival auditions including Round Top Music Festival in 2019. There, he met Mr. John Kitzman, former principal trombonist of the Dallas Symphony Orchestra. Soon after, he studied formally under Mr. Kitzman at SMU for his Masters degree. Derek has been a finalist for the Big 12 Tenor Trombone Solo Competition, and has been apart of the National Music Symphony Summer Music Institute. He also won Semper Pro Musica at Baylor University, making his chamber music debut at Carnegie’s Weill Recital Hall in 2019. Derek currently freelances in the DFW area and has subbed with the Waco Symphony and Allen Philharmonic. He ultimately hopes to perform in a major symphony orchestra somewhere around the world!