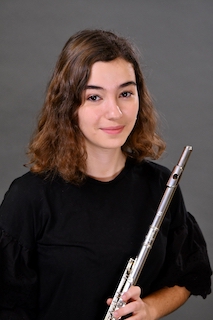 Flute
New York, NY
Yale University
Nadira Novruzov is a recent graduate of the Bard High School Early College in Manhattan and the Juilliard Pre-College Division, where she studied with Bart Feller. In the fall of 2021, Nadira will attend Yale University.
Nadira is the 2019 winner of the National Flute Association High School Soloist competition, as well as the recipient of the Devoe Scholarship for Best Performance of a Commissioned Work. She is a four time winner of the New York Flute Club’s annual Young Musician’s Contest. In 2018, she won the New Jersey Flute Society’s High School Concerto Competition and soloed with the New Sussex Symphony that March. She is also a Youngarts Honorable Mention winner for 2018. In September 2020, she appeared on Show #389 of NPR’s From the Top.
Nadira is the New York Youth Symphony principal flute player and a fellow for the 2020-2021 season. In 2016, she participated in NYYS’s chamber program, at the end of which her group was selected to participate in their Carnegie Hall showcase. In the summers, she has attended the BUTI Young Artists Orchestra program and the Eastern Music Festival, and was selected to be a part of the New York String Orchestra Seminar in December of 2020.