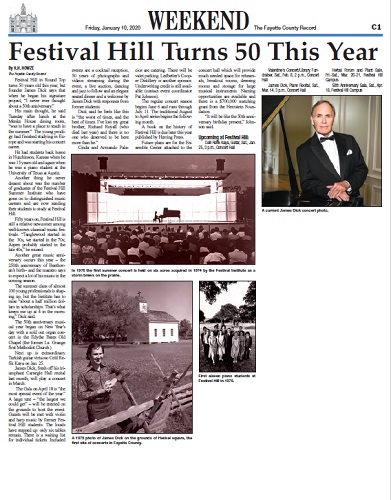 Below is a reprint of a news article, "Festival Hill Turns 50 This Year," written by H.H. Howze, published in the Fayette County Record, La Grange, Texas on January 10, 2020.

Festival Hill in Round Top turns 50 years old this year, but founder James Dick says that when he began his signature project, "I never ever thought about a 50th anniversary."

His main thought, he said Tuesday after lunch at the Menke House dining room, "was to have a place to teach in the summer." The young prodigy had finished studying in Europe and was starting his concert career.

He had students back home in Hutchinson, Kansas when he was 15 years old and again when he was a piano student at the University of Texas at Austin.

Another thing he never dreamt about was the number of graduates of the Festival Hill Summer Institute who have gone on to distinguished music careers and are now sending their students to study at Festival Hill.

Another great music anniversary occurs this year – the 250th anniversary of Beethoven's birth– and the maestro says to expect a lot of his music in the coming season.

The summer class of almost 100 young professionals is shaping up, but the Institute has to raise "about a half million dollars in scholarships. That's what keeps me up at 4 in the morning," Dick said.

Next up is extraordinary Turkish guitar virtuoso Celil Refik Kaya on Jan. 25.

The Gala on April 18 is "the most special event of the year." A large tent – "the largest we could get" – will be erected on the grounds to host the event. Guests will be met with violin and harp music by former Festival Hill students. The locals have stepped up: only six tables remain. There is a waiting list for individual tickets. Included events are a cocktail reception, 50 years of photographs and videos streaming during the event, a live auction, dancing and jazz to follow and an elegant seated dinner and a welcome by James Dick with responses from former students.

Dick said he feels like this is "the worst of times, and the best of times. I've lost my great brother, Richard Royall (who died last year) and there is no one who deserved to be here more than he."

The regular concert season begins June 6 and runs through July 11. The traditional August to April series begins the following month.

A book on the history of Festival Hill is due later this year published by Herring Press.

Future plans are for the Ensemble Center attached to the concert hall which will provide much needed space for rehearsals, breakout rooms, dressing rooms and storage for large musical instruments. Naming opportunities are available and there is a $700,000 matching grant from the Herzstein Foundation.

"It will be like the 50th anniversary birthday present," Johnson said.