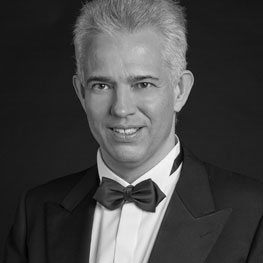 The Austrian conductor Christoph Campestrini is defined by the rich musical tradition of his home country and the cosmopolitan education that he received during his formative years in New York. He studied conducting, composition, philosophy and languages at The Juilliard School and at Yale University.

In 2016 Christoph Campestrini was appointed Kapellmeister at the prestigious Wiener Hofmusikkapelle. There he will conduct the Vienna Philharmonic, Vienna Boychoir and Male Choir of the Vienna State Opera in seven programs of sacred music annuallly. In addition he is also Music Director of the International Late Summer Music Festival Dubrovnik and Music Director of the Oper Klosterneuburg Festival Vienna, where his most recent production of "Cavalleria rusticana"/ "I Pagliacci" has earned accolades of praise by the Vienna press.

Every season he is also a regular guest conductor in the United States and Canada, where he has worked with The Philadelphia Orchestra, Houston Symphony, Detroit Symphony, Indianapolis Symphony, Florida Orchestra, Vancouver Symphony, National Arts Centre Orchestra Ottawa, Orchestre Symphonique de Quebec and many others.

Christoph Campestrini is equally in demand as an accomplished opera conductor. At the well-known Essen Aalto Musiktheater he served as 1.Kapellmeister (Principal Conductor), leading over 100 performances of various repertoire. He has also appeared at the Teatro Regio Torino, Teatro Lirico Cagliari, Deutsche Oper am Rhein, Minnesota Opera, Opera de Montreal, Edmonton Opera and the Sakai City Opera Osaka in Japan.

Among the international soloists he has collaborated with are Lang Lang, Gidon Kremer, Julian Rachlin, Alisa Weilerstein and Julia Fischer.

When not conducting he enjoys composing Lieder cycles, chamber and symphonic music - and he is also a fervent admirer of literature and languages. In addition to German he speaks English, Italian, French, Russian and Spanish.

Finally, he is also deeply committed to the spiritual level of music. He feels that "experiencing music together is one of the strongest possible forms of interchange, it is linked directly to our subconsciousness. In an inspired performance the energies present of both, performers and audience add up to something greater anybody could experience individually”.