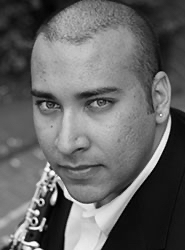 Upon returning to the United States, Victor attended DePaul University where he earned a Master's degree with distinction in clarinet performance under the guidance of Larry Combs, former principal clarinetist of the Chicago Symphony Orchestra. Victor then earned his doctorate in Performance and Literature at the Eastman School of Music with a minor in Music Education where he occasionally performed with the historic Eastman Wind Ensemble and Eastman Philharmonia.

Victor has taught privately in El Paso, Texas; Waco, Texas; Mexia, Texas; Chicago, Illinois; Lansing, Indiana; and at the University of Rochester in New York State. He has attended the Brevard Music Festival, Blossom Music Festival, and Round Top Music Festival. He has been a guest clinician for KMTA, various middle schools, high schools, and universities throughout the country as well as performed at the International Clarinet Association Festival 2014 and the College Music Society Conference. His performances can be heard locally on WUOT 91.5 FM, Knoxville.