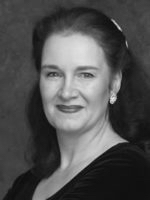 Elisabeth Adkins‘ richly varied musical life makes her equally at home in solo, orchestral, and chamber music repertoire. At the age of 25, she was awarded the position of Associate Concertmaster of the National Symphony Orchestra in Washington, D.C. by Music Director Mstislav Rostropovich. Over an orchestral career that spans three decades, she has worked closely with the most celebrated conductors, composers and soloists of our time.

Ms. Adkins appeared with the NSO as concerto soloist on numerous occasions. She was featured with the Orchestra at the special request of the late Iona Brown, whom she joined in Bach’s Concerto for Two Violins. She has appeared as soloist with the Dallas Symphony, the Seattle Symphony, and the Baltimore Symphony. Other performances include concertos by Beethoven, Bruch, Glazunov, Saint-Saëns, Mendelssohn, Mozart, Vivaldi, and Prokofiev. She premiered new concertos by Andreas Makris (with the National Symphony) and Tom Myron (with the Eclipse Chamber Orchestra). In recent seasons she joined the Sherman Symphony for the Prokofiev Concerto #1, and played the Glazunov Concerto with Germán Gutiérrez and the TCU Symphony.

Ms. Adkins collaborates with her husband, pianist Edward Newman, in a violin/piano duo. Their National Gallery recital was chosen to inaugurate WETA’s series Front Row Washington. In addition to frequent appearances at the Kennedy Center and throughout the mid-Atlantic region, the duo was featured at a special concert for both houses of Congress in the Capitol Rotunda. They regularly present recitals on campus at TCU.

Ms. Adkins is a noted interpreter of the contemporary repertoire. As solo violinist with the 21st Century Consort, she premiered and recorded a number of works, and is a favorite collaborator for many American composers. She has served as concertmaster of the Smithsonian Chamber Orchestra; several CD projects recorded by the Smithsonian group and its director Kenneth Slowik have recently been released. Ms. Adkins was a founding member of the American Chamber Players, and recorded with the group on Koch International Classics. She appeared with several of her musical family members as the Adkins String Quartet, featured at the Piano Texas Festival in June 2016. They performed most of the major chamber works for piano and strings of Brahms and Schumann; these were presented in an intensive 3-concert weekend, featuring pianists Vadym Kholodenko, Davide Cabassi, and John Owings.

In great demand as teacher and coach, Ms. Adkins has been on the faculty of the University of Maryland, the Levine School in D.C., and the NSO’s Youth Fellowship Program; her positions on the faculty of both the NSO’s Summer Music Institute and the National Orchestral Institute at UMD have allowed her to work with young people interested in pursuing orchestral careers. She and her husband are regularly featured artists-in-residence at the Wintergreen (VA) Summer Music Festival and Academy; activities there include recitals, master classes, chamber music concerts and pre-concert interviews, teaching and coaching at the Wintergreen Academy, as well as serving as concertmaster of the Festival Orchestra. This year marks her fourth appearance at Chamber Music Roundup, directed by Misha Galaganov.