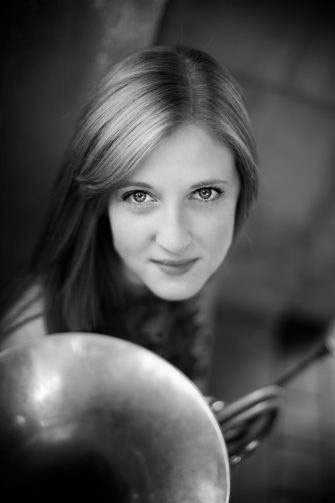 Maura McCune Corvington, Second Horn of the Rochester Philharmonic Orchestra, has distinguished herself as a virtuosic artist through her expressive playing. Prior to joining the RPO in 2015, Ms. Corvington performed several seasons as both Acting Principal Horn and Associate Principal/Third Horn of the Hawaii Symphony Orchestra and Hawaii Opera Theatre Orchestra. She also shared her love of music throughout the Hawaiian Islands as the hornist for the Honolulu Brass Quintet. Ms. Corvington has performed with the Houston Symphony Orchestra, Houston Grand Opera Orchestra, the Buffalo Philharmonic Orchestra, and as Guest Principal Horn with the Rochester Philharmonic. She spends her summers as a resident artist and horn faculty member at the Round Top Festival Institute where she was a two-time alumna of the festival.

A devoted artist educator, Ms. Corvington is an Instructor of Horn and chamber music coach at the Eastman School of Music, the Instructor of Horn at the Eastman Community Music School, and a Horn Mentor for the Rochester Philharmonic Youth Orchestra. Ms. Corvington’s horn students have received scholarship offers and awards to pursue studies at the Curtis Institute of Music, The Juilliard School, and the Eastman School of Music, among others. Her young artists can be heard in leading horn sections and ensembles around the country, at elite summer festivals, as members of fellowship programs including NYO-USA, the Civic Orchestra of Chicago, and the New World Symphony, and as featured soloists with orchestras including the Rochester Philharmonic. Ms. Corvington is regularly engaged as a clinician and soloist across the country, with recent appearances at the Eastman School, Cornell University, the Crane School of Music, and the Midwest Young Artists Conservatory Sunday Series at Ravinia’s Bennett Gordon Hall.

A graduate of the Shepherd School of Music at Rice University, Ms. Corvington completed her Master’s Degree in Horn Performance under the tutelage of William VerMeulen. At the Eastman School, Ms. Corvington completed her Bachelors of Music in Horn Performance as a recipient of the Performer’s Certificate under the instruction of RPO Principal Horn, W. Peter Kurau. She also graduated as a Secondary Piano Major, studying with Daria Rabotkina and Albert Kim, and she accompanied friend and horn mentor, William VerMeulen, in recital at Eastman. Originally hailing from Wilmette, Illinois, Ms. Corvington was inspired at an early age by the renowned Chicago Symphony Brass, and she studied regularly with Chicago Symphony Orchestra hornists Dale Clevenger and Alice Render.

An avid racket sport athlete, Ms. Corvington enjoys visits to her favorite courts, both sunny and snowy, in Rochester. She resides in the vibrant Rochester community where she lives with her husband, Patrick Corvington, a professional trumpet player.