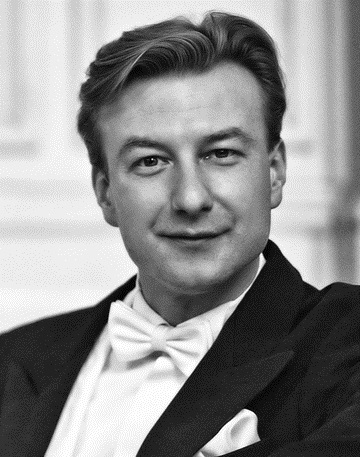 He was born in Vienna and studied conducting under Leopold Hager at the University of Music and Performing Arts in Vienna. Seiji Ozawa has also been a mentor and strong supporter of his career, introducing him to Boston and Tokyo. At the age of 24, Arming was appointed Chief Conductor of the Janáček Philharmonic in Ostrava, Czech Republic, a position he held from 1996 for six years before being named Music Director of the Lucerne Theatre and Symphony Orchestra from 2002 – 2004.

Since conducting the Czech Philharmonic at the opening concert of the Prague Spring Festival in May 2003, Christian Arming's career has flourished and he has subsequently conducted many of the top European orchestras including the Deutsches Sinfonieorchester, Radio Symphony Orchestra Frankfurt, Staatskapelle Weimar, Staatskapelle Dresden, Salzburg Mozarteum, Vienna Symphony, Orchestre de la Suisse Romande, Prague Symphony Orchestra, Orchestra Verdi Milan, Academia Nazionale di Santa Cecilia, Orchestre National de Belgique, Orchestre National du Capitole de Toulouse and RAI Turin. In May 2008 Arming replaced Georges Prêtre at the Academia Santa Cecilia in Rome conducting Mahler Symphony No 5. After much critical acclaim he was re-invited in June 2010 when he conducted Mahler Symphony No 3, which was also a major success.

Arming's work has also won many supporters in the operatic world. In 1997 he conducted at the opening of the Salzburg Festival and was immediately re-engaged for two concerts. In 1999 he conducted a new production of Britten's The Turn of the Screw in Cincinnati and a new production of Rosenkavalier in Triest. Next followed new productions of La Bohème in Lucerne (2001), Salome (2002), Elektra (2003) in Verona and Prince Igor in Strasbourg. Since 2004 he has enjoyed a close collaboration with Frankfurt Opera: conducting productions of Der Fliegender Holländer, Don Giovanni, Jenufa, Les contes d'Hoffmann and, in 2015, Rusalka. He regularly conducts opera in Tokyo, including, in recent years Pelléas et Mélisande, Leonore, Poulenc Les Mamelles de Tiresias, Gianni Schicchi, Salome, Zemlinsky Eine florentinische Tragodie, Lohengrin and Die Fledermaus. In June 2013 he conducted a new production of Der Zwerg by Zemlinsky and began 2014 by conducting The Magic Flute at the Teatro Regio Torinohe and Prince Igor at the Hamburg Staatsoper.

Christian Arming has an extensive discography including works by Janáček and Schubert with the Janáček Philharmonic; Brahms Symphony No 1 and Mahler Symphonies Nos. 3 and 5, Bruckner 7, the Verdi Requiem and Franz Schmidt's Das Buch mit den sieben Siegeln with the New Japan Philharmonic. His recordings with the Orchestre Philharmonique Royal de Liège - Franck's Symphony in D minor, for which he received the Diapason d'Or, and Wagner Opera arias with baritone/bass Evgeny Nikitin - have both received extremely positive reviews in the international music press.