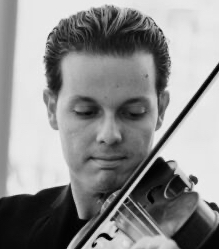 Violinist Christiano Rodrigues first gained recognition as a winner of the competition Jovens Solistas Brasileiros (Young Soloists of Brazil). Following his concerto debut at age eighteen with the Bahia Symphony Orchestra at Teatro Castro Alves, he engaged in numerous performances across the Americas and in Europe. Accomplished as a soloist, recitalist, chamber musician, and concertmaster, Christiano is a multifaceted artist experienced in both traditional and period performance.

Recent engagements have included a guest artist position with the Dubrovnik Symphony Orchestra, in Croatia, at the Late Summer Music Festival. In Dubrovnik, a UNESCO's world heritage site, he was received with great enthusiasm after presenting a recital at the historic Rector's Palace, a performance hailed as "masterful" by the Dubrovnik news. Christiano was also invited to teach masterclasses to talented young violinists from the Music School Luka Sorkocevic.

Christiano has piloted a mentorship program at the Madeline Island Music Camp summer program. In addition to being a member of the Fellowship String Quartet in residency, he observed and conducted chamber music coachings to several young string quartets in the program. In addition, he completed a week long Artist Residency in Minneapolis and Saint Paul, where he engaged in outreach presentations for children in local schools, taught masterclasses for young string quartets from the Artaria Quartet chamber music program, and performed at the Schubert Club's Courtroom Series at the Landmark Center.

Additionally, Christiano has been featured in solo and chamber music performances at the Aspen Music Festival and School, and the Round Top Festival Institute, where he has served as concertmaster of the Festival Orchestra for two consecutive years.

Christiano holds the distinction of being the first graduate violinist from the String Program at Nicholls State University, an intensive program of instruction started by violinist James Alexander in 2007. As a student of this program, Christiano won the third prize at the MTNA national competition, was a guest artist at the Pelican State Chamber Music Series, and appeared in numerous performances across the state of Louisiana.

Christiano holds a Master of Music degree from Rice University, where he studied with Paul Kantor.