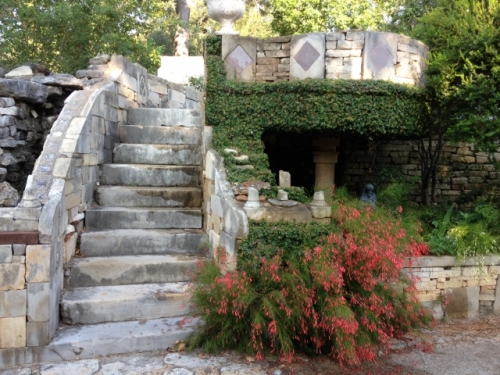 The gardens at Festival Hill are becoming known throughout the US for their extraordinary collection of herbs, the useful plants of mankind. The gardens of Round Top Festival Institute, known as the McAshan Herb Gardens, are a series of spaces planted with a collection of botanical specimens from around the world. Some areas are planted to test summer or winter hardiness; others provide culinary herbs and flowers for the Menke House food service kitchen. All areas contain rare and unusual medicinal plants not often seen in this country.

Enjoy the Terrace Gardens, planned to demonstrate utilization of small spaces, contain both annual and perennial herbs, roses and small trees. Touch the rosemary: each bush is a different variety. Note that each has a different growing habit, leaf texture and fragrance. Don't miss the famous Tree of Love (Campotheca accuminata). Originally from China, an effective cancer drug is manufactured from its bark and leaves. 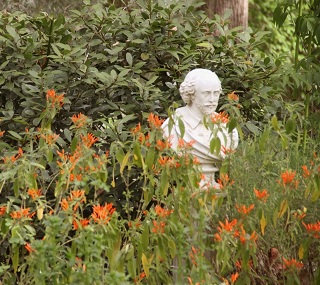 A stroll through the Shakespeare Garden reveals a menagerie of plants mentioned in William Shakespeare's literary works. Shakespeare was very knowledgeable about plants and included references to them in most of his plays and many of his poems. These references were used to give a sense of the season, help set a scene, add historical information and often to tell something about a person's character. Because Shakespeare lived in England (a climate unlike that of Texas), many of the plants he talked about bloom in the summer there. Most of those plants that we can grow here bloom in the spring - such as roses, poppies, larkspur, columbine and marigolds. Evergreen plants and aromatic herbs create interest the rest of the year. We've added a few non-Shakespearean plants for summer and fall color and feel assured that Shakespeare would have loved and talked about them too if he had them in England or could have visited Texas.

In the Sun-Shade Garden you will find the rare Java plum (Myrobalan sp.), black pepper (Piper nigrum Malabar), Carnation of India (Tabernaemontana divaricata) and, depending upon the season, other rare container specimens.

The Pharmacy Garden contains medicinal plants arranged by their geographical origin. It is said that more than 75% of the world's population still obtains its medicines from plants. Admire the rare Melaleuca from Australia, Zatar (Thymbra spicata) from the Mediterranean and the unique Wolfberry (Lycium barbarum) in the China collection. Other rare plants from Africa, India, Mexico, South America, Asia, and Europe are growing here, as well as North American species used by Native Americans.

The Cloister Garden with its four-square bed and a fruit-bearing olive tree adjoins the Mediterranean Garden, home to many varieties of lavender (Lavendula sp.) and oregano (Origanum sp.).

At the back of the house, the Cultivated Grass Garden is planted with native grasses as well as unusual cultivated species. Admire the bark on the lovely crape myrtle (Lagerstroemia faurei) nearby. The famous Lynn Lowery Collection of rare and unusual shrubs and trees, planted more than 30 years ago, is also in this area. Don't miss the colorful gardens around the exquisite Edythe Bates Old Chapel and behind it, the new Herzstein Plaza.

The Fountain Garden on the west side of the Concert Hall is also lovely.