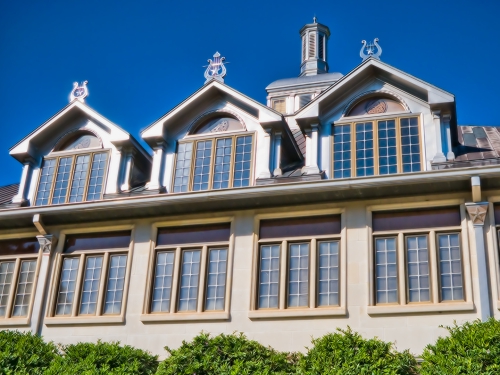 In 1981, construction began on the 1,000 seat Festival Concert Hall. The Concert Hall is the focus of the Festival Hill campus and the site of numerous concerts, many performed before the building included air-conditioning or even a roof. The acoustics are considered phenomenal. 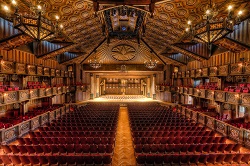 Concertgoers are greeted on the hall's West side by gardens and a marble fountain and, once inside, they are reminded of similar European structures by the ornate woodwork, grand staircases, hand-crafted chandeliers and keen attention to detail inherent in the design. However, European influences notwithstanding, the Festival Concert Hall and the artistry of Festival Hill are truly unique.

DETAILS OF THE CONCERT HALL CONSTRUCTION

The 1,000-seat Concert Hall has been under construction since 1981. The hole for the slab was dug in 1980 and that soil was taken over to the site of Menke House while a special composition of soil designed to hold the weight of the building was imported. The hall rests on a foundation of 96 steel and concrete-filled pylons, each approximately 3 feet in diameter and reaching a depth of over 30 feet.

The stage has evolved since 1993. The stage floor was installed in 1993. It is 2,200 square feet, and topped with Canadian Maple and four additional layers of CDX plywood cork, masonite and concrete. In subsequent years the intricate woodworking finish was applied. The Turkish-Knot design is used in the ceiling beams on the stage. The walls are covered with diamonds. The diamonds are made from two by fours. It takes 36 cuts of the saw to craft each diamond. The baseboards and the green bases for the columns are marble. The body of the columns are painted to look like marble (faux-finished). They were painted over a six-month period by Pat Brown, an Austin artist. The capitals of the columns, the door surrounds and the star and lyre detailing are cast aluminum. They were cast after antique pieces of stone and wood in the Institute collections. The center portion of the balcony railing is French, dating from the later part of the nineteenth century. In 2002 a professional lighting system was installed for the stage and auditorium.

In 1994 the box seat floors were poured, the steel and concrete stairways were created and the beautiful light fixtures were crafted. The four light fixtures are made of cast aluminum pieces supported by a wooden framework. Each of the pieces that comprise the light fixtures were cast from lamps and architectural elements in the Institute's collections. The Institute decided to make its own fixtures when it was unable to locate any to purchase that were appropriate for the elaborate Concert Hall interiors. Each light fixture weighs 580 pounds. A mechanism to raise and lower the fixtures is in place.

The ceiling of the Concert Hall contains 310 4 x 8 sheets of wood. This ceiling is suspended from 600 steel rods and is held in place by over 80,000 metal screws. The large star on the ceiling is made up of 720 pieces of wood and the six smaller stars contain 270 pieces of wood. The swirling pattern of the molding around the two large stars was copied from a dessert plate in the Guion collection. Over five miles of molding are in place. Each piece of the curved molding consists of five separate pieces, bent into place, one at a time. The ceiling contains 124 octagons with a total of 32,000 pieces of wood. There are 95 pieces of wood in each of the small stars in the octagon.

There are 6 boxes on level one and 13 boxes on level two. There is a single row of seats all around the space on level three (the uppermost level). Each of the boxes is filled with the intricate wood-working that has become a hallmark of the Institute. The diamond pattern is used extensively in the ceilings of the box seats.

There are 51 gothic panels that front the third level, 51 that front the second level and 21 on the fronts of the boxes on the first level. There is a total of 1,500 linear feet of Gothic tracery panels in the Concert Hall, comprised of 110 different designs.

One of the designs repeats or alternates. This is the design that is used in the Rose Window in the Lausanne Cathedral in Lausanne, Switzerland. The original is made of stone and is many times larger. The stained glass in the original depicts scenes of creation from the book of Genesis. There are 100 different designs from a book of Gothic Tracery published in London in 1851. The book is in the Institute's rare book library. There are 8 of these Gothic designs in the ceiling and 6 on the back wall on the second level. Surrounding the panels is an ivy and fleur-de-lis pattern in cast aluminum. This pattern was taken from the stairway railings on the grand staircase at the back of the Concert Hall.

At the back of the hall behind the stage is the nerve center of Festival Hill, the offices and the Arts and Architecture Library. The William C. Wiederhold Music Library is there and houses the music, manuscripts, scores, recordings and archival materials of the Institute.

The exterior is covered with limestone and now that the large stage doors are in place the rest of the exterior is ready for limestone. The roof is copper, washed with lead to make it dull, and all other metal surfaces are stainless steel. The lyre and star which is the logo of Festival Hill are finished, in the outside curve, with ice cream scoops from Wal-Mart. The smaller circular ornaments are melon scoops. Even in the most carefully designed elements of Festival Hill there is some evidence of humor and whimsy.

The beautiful cupola, which tops the hall is an exact copy of the cupola which topped the now demolished chapel of the 1901 Seton Hospital in Austin. Redwood was used to frame it.