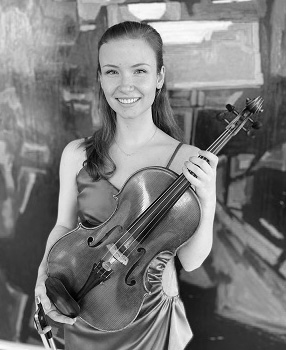 Viola
Dacula, GA
Vanderbilt University
Annabelle began playing the viola at 9 years old through her school’s music program. She is currently a student of Kathryn Plummer at Vanderbilt University. Most recently, she has had the opportunity to play in masterclasses given by Victoria Chiang, Basil Vendreys, and Nokuthula Ngwenyama. In the previous two summers she attended Eastern Music Festival where she studied with Daniel Reinker and Benjamin Geller. She has also attended Brevard Summer Music Festival, as well as the Cincinnati Young Artists Chamber Music Festival.

Prior to college she was a member of the Atlanta Symphony Youth Orchestra, GMEA All State Orchestra, and the Franklin Pond Chamber Music Program. Her quartet won the grand prize in the Franklin Pond Chamber Music Competition. The quartet was coached by Jun-Ching Lin as well as other Atlanta Symphony musicians, and they played in masterclasses given by Peter Oundjian, Cornelia Heard and Paul Murphy.