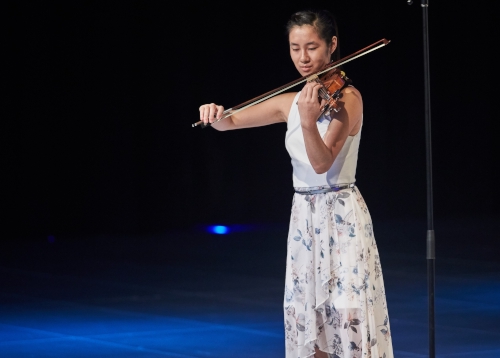 Violin
Singapore, Singpaore
Yong Siew Toh Conservatory of Music
Joelle Chiam, 18, currently studies with Mr. Ang Chek Meng following an early admission to the B.Mus programme at the Yong Siew Toh Conservatory of Music in 2018. She has participated in many local violin competitions and was awarded third prize at the Chamber Music Competition of the 3rd Singapore Performers’ Festival 2010, a Silver Award for violin at the 4th Singapore Performers’ Festival 2012, as well as Platinum at the 7th Singapore Performers' Festival 2018. In the National Piano and Violin Competition 2017, she was one of five semi-finalists in the Violin (Senior) category. Joelle attended the Meadowmount School of Music under Gerardo Ribeiro during the summer of 2016, and has also played for violinists such as Peter Danis, Siow Lee-Chin, Borika van den Booren, Ray Chou Chang, Gil Shaham, and Kam Ning. An active member of the Singapore National Youth Orchestra ("SNYO") from 2014 to 2019, she performed as both Principal Second Violin and Concertmaster. She was also selected to represent the SNYO and Singapore at the 34th Toyota Youth Orchestra Camp in Japan in March 2018.