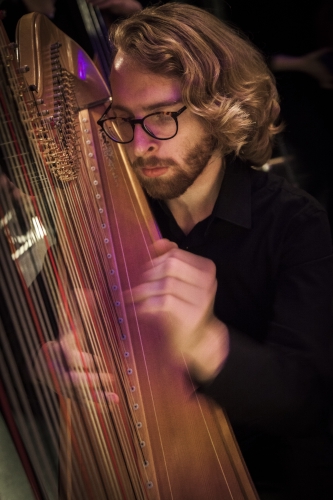 A finalist of the SMU Meadows Concerto Competition in Dallas, Zane has been a featured performer of the Pierre Monteux School, Eastern Music Festival, Musical Arts Club of Dallas, and the Colorado, Oklahoma, and Nebraska harp workshops. In the summer of 2018, he was named a Bernard Osher Instrumental Scholar. He has also performed in masterclasses for harpists such as Judy Loman, Gaye Leblanc, Shelly Du, and Sasha Boldachev. Zane is also an active member in several ensembles at SMU, including SMU’s Symphony, Wind Ensemble, contemporary ensemble SYZYGY, and the SMU choral ensembles.

In addition to harp, Zane spent much of his life studying violin under Jane Aten and composer Mary Alice Rich. He has performed with the Greater Dallas Youth Orchestra around North Texas from 2010-2015. In 2015, he toured with the GDYO across China’s major cities.