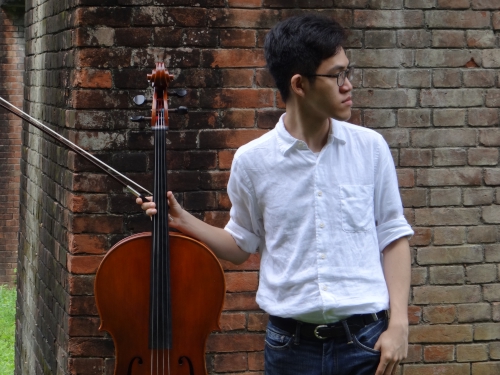 Cello
Hartford, CT
University of Hartford The Hartt School
Pin-hui Tsai, born in 1994 in Taiwan, started studying cello at age 9 with his first teacher, Shin-yu Liu. At the age of 16, he began studying with Janet Chien, Principal Cello of the Taipei Symphony, through his school's special music program. After completing his secondary studies in Taiwan, Tsai came to the United States to begin his Bachelor of Music degree with Stefan Kartman, Professor of Cello at the University of Wisconsin - Milwaukee. Graduating from UWM, Tsai is currently working towards his Master’s degree at the Hartt School at University of Hartford, under instructions of Prof. Mihai Tetel.
Among many music activities in which he has participated, Pin-hui Tsai has attended several music festivals including California Summer Music (2010), Kirishima International Music Festivals (2011 & 2012) in Japan and Vianden International Music Festival in Luxembourg, Europe (2014). He has also played in masterclass with renowned cellists Irene Sharp and Tsuyoshi Tsutsumi. He is the prize winner of Taipei Music Competition in 2005, 2007, 2009, 2011 and National Competition in 2010, 2012. He is the participant of Stamford Orchestra fellowship program in their 2018 season.