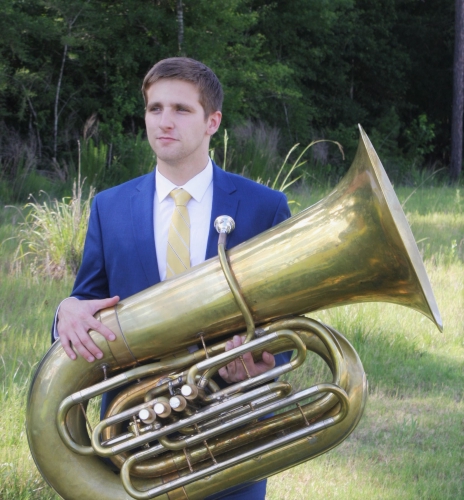 Tuba
Spring, TX
Baylor University
Dillon Jefferies is a tuba player from Irvine, California. He currently resides in The Woodlands, Texas, where he attended The Woodlands College Park High School and graduated in the class of 2015. While there, he performed with the 2015 TMEA All-state Philharmonic Orchestra, along with other solo competitions and ensembles. He is currently studying at Baylor University where he studies Tuba Performance in the class of 2019. At the age of 18, he won the tuba position for the Round Top Festival Institute in the summer of 2016. In 2017, he was awarded 2nd place at the SCRTEC Mock Orchestral Audition for tuba, and placed 1st the following year. Also in 2018, he was offered the Principal Tuba Fellowship to the Texas Music Festival, as well as winning the same position at the Round Top Festival Institute. Dillon now performs with the Baylor Symphony Orchestra, Baylor Wind Ensemble, and numerous chamber groups within his school. His primary teachers include Vince Jackson and Kent Eshelman.