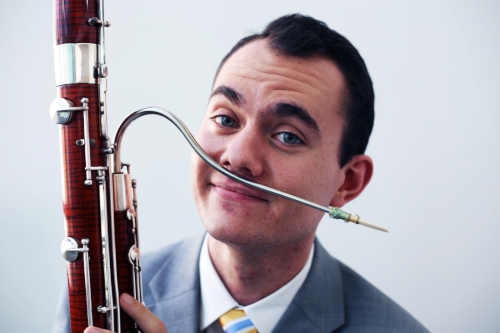 Bassoon
Avon Lake, OH
The Juilliard School
Regarded for his “relaxed, singing tone” (clevelandclassical.com) bassoonist Thomas English is currently completing his Master of Music degree at The Juilliard School studying with Judith LeClair. He earned his bachelor’s degree at the Oberlin Conservatory of Music under George Sakakeeny. Most recently, Mr. English has appeared as guest Associate Principal Bassoon with the Atlanta Symphony Orchestra as well as principal with the Juilliard Orchestra, including as part of Juilliard Opera's recent production of Janacek's Katya Kabanova. He has pursued his passion for orchestral performance as a fellow at the Tanglewood Music Center and twice at the Music Academy of the West. He attended the Interlochen Arts Camp as an Emerson Scholar and played principal in the World Youth Symphony for two summers.
Mr. English participated in the Indianapolis Symphony’s Side-by-Side program for four years. As the winner of the program’s 2011 concerto competition, he performed the Hummel Bassoon Concerto with the Indianapolis Symphony. Mr. English’s awards include second prize in the International Double Reed Society’s 2013 Young Artist Competition and winner of the Indianapolis Symphony’s 2011 Side-by-Side Concerto Competition. He has also appeared as soloist on NPR’s From the Top. A native of Carmel, Indiana, Mr. English enjoys golfing and exploring new cuisines.