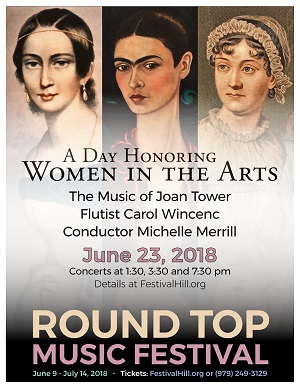 This Saturday, June 23, 2018, Round Top Festival Institute celebrates "A Day Honoring Women in the Arts." On the occasion of composer Joan Tower's 80th Birth Year Celebration, Ms. Tower will grace our campus with her presence. Her works will be featured in all concerts on the special day. The Institute presents conductor Michelle Merrill for the 7:30 PM concert. Flutist Carol Wincenc will perform during the 1:30 PM and 7:30 PM concerts. 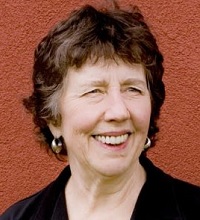 Joan Tower, composer
Joan Tower is widely regarded as one of the most important American composers living today. During a career spanning more than 50 years, she has made lasting contributions to musical life in the United States as composer, performer, conductor, and educator.

Tower's compositions cross many genres. Her works have been commissioned by major ensembles, soloists, and orchestras, including the Emerson, Tokyo, and Muir quartets; soloists Evelyn Glennie, Carol Wincenc, Brett Deubner, David Shifrin, and John Browning; and the orchestras of Chicago, New York, St. Louis, Pittsburgh, and Washington DC among others.

In 1990, Tower became the first woman to win the prestigious Grawemeyer Award for Silver Ladders. She was the first composer chosen for a Ford Made in America consortium commission of sixty-five orchestras. Biography continued 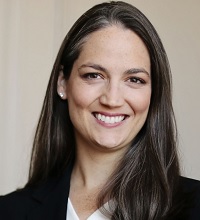 Michelle Merrill, conductor
Michelle Merrill currently serves as the Associate Conductor of the Detroit Symphony Orchestra. She made her classical subscription debut with the DSO in April 2016. Born in Dallas, Texas, Ms. Merrill studied at Southern Methodist University's Meadows School of the Arts, where she holds a Master of Music Degree in conducting and a Bachelor of Music in performance.

A passionate and dynamic artist, Ms. Merrill was named as one of Hour Detroit Magazine's 3 Cultural Organization Leaders to Watch in 2015, and was profiled by the Ford Motor Company on their website, fordbetterworld.org. She is also a recipient of a 2016 Solti Foundation U.S. Career Assistance Award. In 2013, she was awarded the prestigious Ansbacher Conducting Fellowship by members of the Vienna Philharmonic and the American Austrian Foundation, which enabled her to be in residence at the world-renowned Salzburg Festival. Biography continued 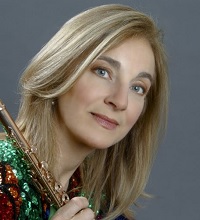 Carol Wincenc, flute
Carol Wincenc, an established flutist, performer and instructor, currently teaches at The Juilliard School. She has premiered numerous works written for her by many of today's most prominent composers including Joan Tower. She has served as flute faculty at Round Top Festival Institute periodically since 1993.

Delighting audiences for over four decades with her signature charismatic, high virtuosity and deeply heartfelt musicality, she has appeared as soloist with ensembles, symphonies and orchestras world-wide. She is a member of the New York Woodwind Quintet and a founding member of Les Amies with New York Philharmonic principals Nancy Allen, harpist and Cynthia Phelps, violist (Round Top Festival Institute alumna). For over a quarter of a century, Ms. Wincenc has served on the faculties of The Juilliard School and Stony Brook University, having mentored and graduated countless rising flute stars commanding principal flute positions in major symphony orchestras and university professorships. Biography continued