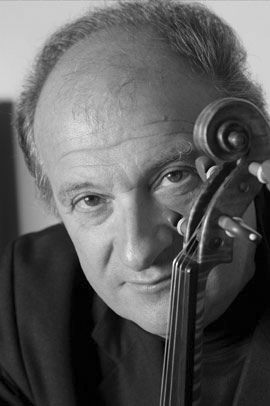 In 1958 when he was only 12 years of age, Regis Pasquier was awarded the First Prize for violin and chamber music at the Conservatoire National Superieur de Musique de Paris. Two years later, he went to the United States to give a recital in New York.

This was a decisive year for he was to meet Isaac Stern, David Oistrakh, Pierre Fournier, Nadia Boulanger and Zino Francescatti who heard him play, was impressed by his talents and a few years later requested his collaboration to record Johann Sebastian Bach's concerto for two violins. From that moment Regis Pasquier entered the very exclusive circle of great violinists of world fame.

He has performed with the greatest orchestras in Japan, Europe, Canada, South America and particularly in the United States with the Cleveland Philharmonic conducted by the eminent George Szell.

He is also a noted chamber musician. Among the many accolades he has received are the Georges Enesco Prize, the Charles Cros Prize and the French Record Academy Prize. In 1985, he was appointed Chevalier des Arts et des Lettres and Professor of violin and chamber music at the Conservatoire National Superieur de Musique de Paris.

His recording of the Beethoven sonatas for violin and piano has won the Victoires de la musique. Recent releases include Mozart violin concertos with the Orchestre Philharmonique de Liège conducted by Pierre Bartholomee.

Regis Pasquier is regularly invited abroad to Japan (tour with the NHK), Belgium, Switzerland, Canada, South America, United States. This fall he appears with the Sydney Symphony and the Tasmanian and West Australian Symphony orchestras in Australia.