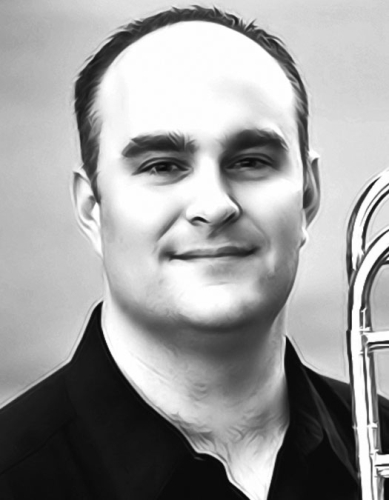 Lee Rogers, a native of Dallas, currently holds the position of Principal Trombone with the Washington National Opera/Kennedy Center Orchestra as well as Principal Trombone of the Harrisburg Symphony Orchestra. Rogers is a graduate of The Juilliard School and Southern Methodist University, where he studied with Joseph Alessi and John Kitzman. In 2002, Rogers represented the United States at the Kyoto International Music Students Festival, where he presented a solo recital of American music, including Creston's Fantasy for Trombone. Over the past several years, Rogers has performed and recorded with the Dallas, Cincinnati, Grant Park, National, and Baltimore Symphony Orchestras as well as the Buffalo and Naples Philharmonic Orchestras. Highlights include performances in Carnegie Hall and Vienna's Musikverein with the Dallas Symphony Orchestra, as well as their 2000 and 2001 summer residencies at the Vail Valley Music Festival. As a member of the Cincinnati Symphony, Rogers participated in numerous tours including Japan, Europe, Carnegie Hall, China and Singapore. In August of 2010, Lee joined members of the Iceland and Melbourne Symphonies to record the first-ever CD devoted entirely to low brass orchestral excerpts entitled Eruptions.

In 2012, Rogers was honored to participate in the National Symphony Orchestra's South American tour. In early 2014, Lee performed several weeks with the Orchestre symphonique de Montréal as guest tenor tubist. Works performed throughout Canada and Europe included Mahler's Symphony #7 and Berlioz's Symphonie Fantastique. He has recently been engaged numerous times as a substitute with The Philadelphia Orchestra.