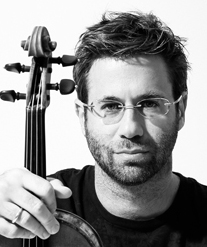 Hailed by Michael Tilson Thomas as "an excellent violinist," Tomas Cotik was a first-prize winner at the National Broadcast Music Competition in his native Argentina in 1997, and the winner of the Government of Canada Award for 2003-2005. An avid recording artist, Dr. Cotik has recorded fifteen CDs for Naxos and Centaur Records that include complete opuses by Bach, Mozart, Schubert and Piazzolla. These releases have received the highest acclaim from some of the best-known publications. Fanfare Magazine praised him, writing: "Cotik never indulges in violinistic brilliance at the expense of music, but he sounds consistently brilliant nevertheless…for those open to so thoughtful a violinist as Cotik, these readings should stand beside Pinchas Zukerman's readings on the shelf. Strongly recommended…” and “Cotik makes Kreisler seem almost smarmy...Isabelle Faust almost mannered...and Julia Fischer...as though she's filed down the detail.” The Gramophone Magazine writes, "[the] joyful virtuosity and stylish musicianship that Tomas Cotik brought to [the] superb cycle of Schubert’s violin-and-piano works…happily permeate [his] cycle of Mozart’s sonatas. There are so many delightful details to savour that one hardly knows where to begin...a most rewarding Mozart cycle." MusicWeb International nominated his Schubert release as a "Recording Of The Year,” stating “[m]y first chamber choice for the year...I’ve had a listen to a few alternatives…including Isaac Stern and Daniel Barenboim on Sony Classics and Lydia Mordkovitch and Gerhard Oppitz on Chandos, but this duo on Centaur pretty much ticks all the boxes.” Cotik’s latest Piazzolla CD on Naxos was nominated for the International Classical Music Awards and his new recording of Mozart’s complete sonatas has two million streams on Spotify. Mr. Cotik was a rotating concertmaster with the New World Symphony and has performed hundreds of recitals and chamber music concerts across the globe as a member of the acclaimed Amernet, Delray, and Harrington string quartets. He has worked closely with artists such as Joseph Kalichstein, Franklin Cohen and members of the Cleveland, Miami, Pro Arte, Vogler, Vermeer, Tokyo and Endellion string quartets. Mr. Cotik has performed hundreds of chamber music concerts internationally, giving recitals in Germany, Holland, Switzerland, Spain, Canada, Argentina, Mexico, Japan and throughout the U.S. He participated in more than 20 international music festivals and created collaborative projects with artists from various fields. In recent seasons, he appeared at New York’s Merkin Hall, at the Music Mountain Festival in Connecticut, at the Kennedy Center in Washington, as well as in concerts in Detroit, Las Vegas, Omaha, Naples, Tampa, Miami, and tours in California, Mexico, Taiwan, and Israel. These concerts received enthusiastic reviews in the Strad and the Washington Post, among many other publications.
Committed to passing on his passion for music, Dr. Tomas Cotik was appointed Assistant Professor of Violin at Portland State University in 2016, where he recently received the inaugural Dean’s Council Award For Research, Scholarship & Creativity for his significant contributions to research, scholarship and creative activity at the international level. He previously taught at West Texas A&M University, Florida International University, and at the University of Miami’s Frost School of Music. In the work with his students, Tomas emphasizes a natural approach to the instrument, providing tools to avoid unnecessary physical tensions. His numerous articles on this philosophy, string pedagogy and on the interpretation of Bach’s music were published by The Strad, the American String Teacher Association Journal, American Music Teacher Magazine, and the National Association for Music Education Magazine.